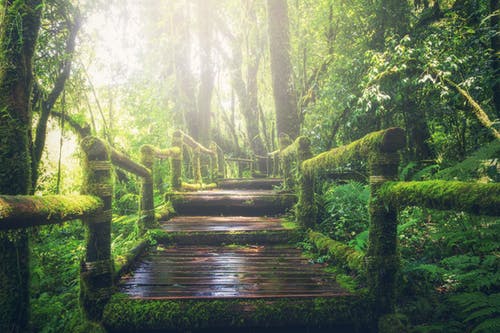 When you walk into a room and completely forget what you wanted or why your ancestor's brain wasn’t sucked out by a bear!

Breathe easy, It’s not just you!  You know when you’ve just got up from the sofa and walked into the kitchen to…. to what?  You must’ve wanted something, you KNOW you needed something, you came in here for a reason but ….. but are now absolutely baffled as to what it was!

So you sigh with annoyance and go back to the comfort of the sofa and *bingo!* you remember that you wanted to get the KitKats you’d hidden in the tin under the disgusting Licorice & Poppyseed teabags. You turn back but this time keeping the KitKats (or vile tea) as ‘memory one’ as you enter the kitchen and now you get to add to your fat, Yey!

This is known as the Doorway Effect: us humans are complicated things – (at the risk of sounding a bit anthropocentric, the human brain is the most complex single structure that we’ve ever come across. But, hey ho, that’s another blog, another time) – Apes with over-sized brains that even now science hasn’t yet come to grips with. We don’t know the half of what’s going on in there, let alone how.  We’re still mostly at the mapping stage of the brain, the macro-level if you like; we might know how a neuron fires, how it transmits its message to one, or hundreds, of other neurons; we might even know when or what the trigger is.  Sometimes we know generally which areas of the brain deal with specific actions or thoughts, and we’re just beginning to get to grips with the fact that this mass of fatty tissue clogging up our skulls is actually humungously complicated. Possibly too extraordinarily complicated for, errmm, a human brain to comprehend.

Now we’ve established that, there are of course, some things that we can, and do understand and The Doorway Effect is, (perhaps), one of them (“Hurrah!”). There have been quite a few scientific studies looking into it and it appears to be a simple effect of our genetics: the smart money is on our nearest relatives, the chimps, bonobos and orangs, having a similar “problem” (actually it’s more likely a survival skill) as it’s really very simple.  And what seems to have happened is this:

Long, long ago on a planet far, far away in time, our ancestors decided that it sometimes looked quite nice out in the sun on the savannah, just as it was rather fun in the shade of the trees in the forest, or foraging down by the river, or on the mountainside, and they also wondered what was deep-back in the furthest reaches of the scary caves… and for whatever reasons, they decided to explore all these different environments, and more, becoming adept at moving between them, from woodland to heath, from seaside to cave.

But there was a problem: they kept getting eaten.  And those intrepid hominids that got eaten were “less likely” to pass on their genes (“Dur!”) than their brothers & sisters who survived and who could then grub around for shellfish, or fruit, or roots, or other unfortunate creatures who hadn’t realized what a threat these weirdo primates might be. These hominid folk DID pass on their genes and, with them came the reason they didn’t end up ripped to shreds by some sabre-toothed feline or on the kids’ menu of the giant Ursine community.

The root of it lies in how we access memory and why. As our ancestor moved from the well-lit savannah into the dappled light of the forest her goal might well have been to pluck a juicy hanging red fruit from the tree she knew to be a bit further in. She had done well to keep a look-out for the proto-lions that hunted on the savannah, keeping herself alive on the grassland. But, as she entered the forest, this threat almost immediately disappeared and another became hideously more likely: a Tree-climbing Crocodile blending into the bark and looking for its next mammalian morsel. (Yes, really!).

So her priority instantly changed – her most pressing need now was the avoidance of death in this new place; and her brain, sensing that she’d moved from one environment to another, pushed the thoughts of biting into the sublime sweetness of the proto-apple from her consciousness leaving her clear-headed and alert,  readying the survival mechanisms she had for this new place into the forefront of her mind. As she passed almost instantaneously from one place into another with completely different features, so her mind pinged & flipped and prepared her for these new and different threats.

And just now, when you got up off the sofa and headed for the kitchen, you had a specific goal in mind: to retrieve and eat the KitKats.  However, once you passed through the doorway you were in a quite different looking place (All chrome and polished tiles, not a plump cushion and comfortable lighting effect in sight) and your brain, sensing this, pushed all thoughts of vile licorice away and readied you for some new, as yet unseen threat (death by Mutant Ninja Freezer perhaps?).

So the next time you go downstairs to get… “Bugger! What was I doing here again?”….. thank evolution! Thank your lovely ancestor’s growing brain for the fact that she wasn’t mashed up by that enormous Terror Bird with its anvil-hard, skull-crushing beak, blinking its cruel avian eye her way. It’s worth waiting for that KitKat, really it is.