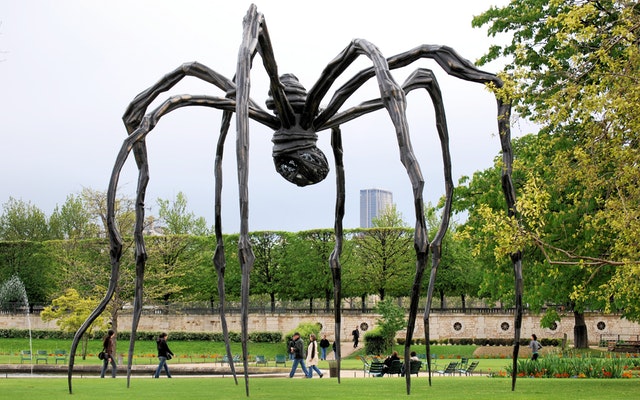 Spiders, from Mars? (Or are they just walking across the ceiling only to drop down on your face when you’re half asleep and…. Oh God!)

Put “Spiders” into Wikipedia and the entry reads: “Spiders are air-breathing arthropods that have eight legs and chelicerae with fangs able to inject venom. They are the largest order of arachnids and rank seventh in total species diversity among all orders of organisms.”

Chelicerae, by the way, are those mutant leg-things that they have as their “mouth parts” and that help to ferry those flies, bees, millipedes, lizards, birds, small mammals (oh God!) and other terrified creatures into the mouth cavity - where the gloop is waiting to deliquesce them. To slowly turn their outside, then their insides, into a runny paste that can be sucked down into the arachnid stomach-thing. Unable to scream, having been stabbed with monstrous needle-like fangs, and pumped with paralyzing venom, only their eyes are left alert to the full horror of their awful end.

Fred Hoyle, once the Astronomer Royal and now a dead person viewed by some scientists today as “a bit mad” (but aren’t they all?), speculated that spiders were extraterrestrial, that they were not a class of creature native to our planet, because an intermediate species had never been found in the fossil record. There was life on Earth “before spiders” and then there is life on Earth “after the appearance of spiders”.  And don’t we all know this, deep in our hearts?

Even the smallest, cutest, little spider is ready to pounce and thrust its scimitar teeth deep into the head or body of its doomed prey. Then it watches, with its multitude of unblinking eyes, as the victim slows, twitches, becomes still, and its spidey-brain thinks “Let the ritual begin!”. And it moves slowly, slowly, slowly forward on its eight limbs, in that ‘each leg moving independently’ creepy-creepy way (oh sweet Lord!).

You know, I thought this was a good idea - a blog about spiders, how diverse they are, how they have colonized almost every terrestrial habitat on Earth. How extraordinary is the arachnid in all sorts of ways: some dance; they actually “feel” the world around them; some look after their young (Ahhh!)…  (Arggghhh!); they have spinnerettes which spin silk so strong that, size for size, it beats steel in strength; an evolutionary marvel. Some make parachutes (honestly, they do), and have been found far up in the mesosphere, above the stratosphere, calmly flying to territories new and contemplating world domination and dalek-like extermination.

So, no, it wasn’t a good idea at all and now I won’t get to sleep because all I’ll hear is the silence and then the sudden skrit skrit skrit as the most monstrous arachnid of all pulls its self from under my bed and.. Oh God, no, please… NO!